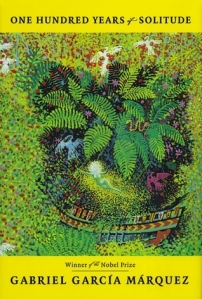 One Hundred Years of Solitude has been on my reading list for a LONG time, but I’ve never got around to reading it before now. It’s arguably the greatest and most influential novel to come out of South America, a classic in every sense of the world. García Márquez became an international phenomenon as a result of writing it, gaining awards worldwide (and the Nobel Prize for Literature in 1982). I actually went to a discussion at Hay Festival last year with travel writer Michael Jacobs, who met García Márquez during his travels around Colombia not long ago. Jacobs mentioned a story (I can’t remember if he witnessed it first hand or if he was just told about it) about García Márquez reading One Hundred Years of Solitude after he’d developed dementia and saying ‘whoever wrote this book… he must be a genius.’ Despite the sadness, there’s something maddeningly sweet about that, the author of one of the greatest novels of all time reading the book HE wrote and appreciating its beauty from an unknown perspective.

García Márquez is Colombian and the book was originally written in Spanish, but it has been translated in 37 languages since it was written in 1967. I read the English version which was translated by Gregory Rabassa. I am always a tiny bit wary of novel translations, particularly when a book is described as being poetic (as this is) – how much of the sentiment and wit is lost in translation? – but I still could appreciate the beauty and craftmanship of the writing, even if it no doubt differed slightly from its original. It’s difficult to pinpoint exactly when the novel is set. The characters have a very basic understanding of science and consider ordinary objects such as pianos and magnets some kind of magic, but as the town is isolated, it’s hard to work out if they are in sync with the rest of the world or very behind. Certainly it’s not set in modern times. This review does contain spoilers, so turn away now if you want to read it with a fresh perspective.

The book is set over a century (funnily enough!) and focuses on a town named Macondo, with our leading characters being the founding family who dwell within it (the Buendías). Followed over several generations, we witness the daily life of this family and the various tribulations that the separate characters go through throughout their lives. The novel pretty much defined the genre of magical realism, subtly blending fantasy and magic with realistic rural life in Macondo. Starting with the founders of the family, José Arcadio and his wife Úrsula, we learn about how the two of them founded the town and created a family line that was doomed by repetitive destruction and selfish whims.

On the first page of my copy of the book was a family tree, which was something I had to constantly refer back to throughout reading. Following the family line might not have been such a problem if the men didn’t all have the same names: every male character in the Buendía line was either called José Arcadio or Aureliano. This STILL might not have been a problem if only one or two were alive at a time, but naturally-speaking all of the characters were blessed with extremely long life – Úrsula in particular lived well over 120 years. I say naturally-speaking as some of the characters did die young if they were killed or murdered, but the ones who were left to stick it out did a proper job of it (which has become another feature of magic realism). Despite the confusion of a child living at the same time as his great-great-grandfater (and every man down the line having the same name), the characterisation didn’t really suffer. Whilst the characters were similar owing to the repetitive nature of the Buendía family (more on that later), each one seemed to have its own distinctive personality and desires. There’s a theme that all the José Arcadios are rather feisty and loud and all the Aurelianos are more calm and pensive, which is interesting as at one point identical twins are born, one named José Arcadio Segundo and the other Aureliano Segundo, and the theory circulates that they were perhaps switched at some point during childhood due to the way they grew up with the personalities attributed to the other namesake.

Why one hundred years of solitude? Loneliness and isolation are very prevalent themes in the novel, initially describing the town which is independent and out on the sticks, but eventually each of the characters seems to succumb to solitude as a result of their actions or state of mind. Indeed, despite the fact all of the characters have ordinary desires and more than enough opportunity for love, the only characters who maintain happy and stable relationships are the two founders and the two right at the very end of the line. Both of these couples are connected by incest (disturbingly, incest is a common recurrence for the Buendías) and whilst Úrsula fears her children will be born with curly pig tails as a result, it isn’t until the end of the line that a child is born with such a mutation.

Like many classics, the novel breaks the ‘show, don’t tell’ rule of writing. This rule is pretty solid – for example, if you’re reading a novel, it’s better to learn about a character’s personality by the way they speak or their body language, as opposed to reading an outward description of what the character is like. From a writer’s perspective, this a way of engaging the reader on a much more emotional level than just having them as a passive listener to a story. Whilst I agree with this rule and feel constantly aware of it in my own writing, I’m always uncertain about its place in the classics. When you’re studying writing, breaking this rule is ingrained in you as being one of the worst things you can do – but, as I said, SO many classics are written this way, some being considered the greatest novels of all time (this one is a good example, but there are plenty). I do believe it made One Hundred Years of Solitude that little bit more difficult to read, but I also think that due to the magic realism and the rural, South American setting, the narrative began to resemble a spoken fairytale, which made it into something even more poetic. It’s not an easy book to read by any stretch, but it’s incredibly rewarding. I read it very slowly (it was a great companion for the commute) but my friend Misha’s mum said she found it very difficult indeed, despite her son’s positive reaction. Indeed, my dad spoke of it very highly, so it’s interesting to hear such a variety of perspectives of it.

It doesn’t have a film adaptation as far as I’m aware, which doesn’t particularly surprise me. The beauty of magic realism is the way fantasy is very subtly interwoven into a book’s plot, but I think the subtlety might be lost on a screen, although there are a lot of themes that a film adaptation would be able to explore and turn into powerful and moving on-screen entertainment. There are also some sections that painted such a vivid picture in the mind that would look visually stunning (particularly the moments of war and rebellion), but at this point, however, García Márquez hasn’t sold the rights, and it’s looking like he never will.

So, Goodreads review. One Hundred Years of Solitude was an incredibly powerful book and one I won’t forget, but the pace and difficulty of reading it bumps a star off. I also felt as if the end was dragging (it could have ended around 100 pages before it did). With that in mind, four stars. Still, I’m ready to tackle some more of García Márquez soon – I’ve got a lifetime’s work to catch up on.