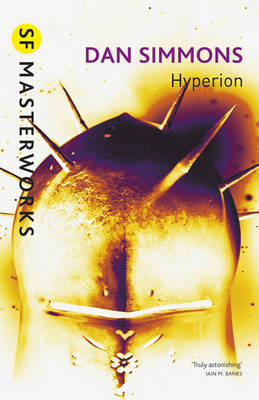 I’d never heard of Hyperion until I hit the pub with a colleague and he told me it was one of his favourite books. True, I’ve only dipped my toe into the world of sci-fi literature, despite having a draw towards it in film and other mediums (and indeed, flirting with it in my own written fiction), so this wasn’t altogether surprising, but I was mildly intrigued based on what he said. I mentioned it to my dad – much more of a sci-fi geek – and he hadn’t heard of it either, but admitted it looked good. I might not have got round to reading it for a long time had the same work friend, Alex, not spontaneously bought me a copy in Waterstones one evening (so keen was he for me to read it). Another old uni chum who caught me on Goodreads promised me it would be brilliant.

Paradoxically, this made me sceptical. How often do books like this live up to their hype? Welp – no pun intended. Still, with a fresh copy I thought I’d check it out sooner rather than later – and to my surprise, it only took me a few days to storm through the c. 500-page novel. No spoilers ahead (yay!)

I’ve mentioned in the past that others tend to find fiction disturbing when I don’t (see: my sister’s reaction to A Clockwork Orange), but ‘disturbing’ is just not a term I tend to associate with literature. To me books are often moving, shocking, heartwarming, and exciting, yes, but never really disturbing – but sci-fi has a way of piercing me right to the bone in a way that no other genre does. I stand corrected – it’s probably the only genre that HAS always disturbed me a little, and in that sense every sci-fi book I’ve read has stayed with me – right from my early forays into Terry Pratchett as a child, to reading Jeff Noon’s Vurt as a teenager, to Under the Skin just a few months ago. Hyperion – the first proper, headfuck of a sci-fi book I’ve read in years – was no exception. Intensely captivating and disturbing in equal measure, it was easy to devour in less than a week, and I have no doubt it’s another that will stay with me for a long, long time.

The whole thing is heavy with literary references. The title takes its name from an abandoned poem by Keats (and Keats is mentioned frequently throughout the novel) and the plot is structured in the same vein as The Canterbury Tales – a phenomenally exciting starting point for a sci-fi epic. To sum up the plot without spoilers: it’s the eve of catastrophic war for the ‘Human Hegemony’, a colony occupying multiple planets and worlds long after the original human race has fled ‘Old Earth’ and mostly died out, and seven individuals are summoned for a pilgrimage to holy ground on the planet Hyperion. After journeying there, specifically to the ‘Time Tombs’, they will potentially meet the Shrike, a mysterious monster (‘part god, part killing machine’) who’s wreaking havoc on Hyperion and doesn’t abide by the same laws of space and time. None of them are outward supporters to the cult known as the Temple of the Shrike, and as a result they are all initially perplexed as to why they’re the ones who were summoned by them to undergo the journey. Still, does the Shrike have the power to save them from the war? Or will it destroy them? This isn’t known, and their separate stories reveal separate motivations for wanting to confront it.

Therein lies the Canterbury Tales structure – each of the pilgrims tells their own tale, in this case their previous encounters with Hyperion, while they pass across the planet on their way to the Time Tombs. In line with Chaucer they are referred to by occupation – the poet’s tale, the scholar’s tale, the soldier’s tale, etc – and each story occupies a significant chunk of the novel. There’s a hint at the start that one of them is an enemy spy, though no one is sure who, and indeed, once they begin telling their tales, it becomes undetectable for the reader. Our primary vessel for the plot (the ‘ear’ for the reader, so to speak) is the Consul, one of the pilgrims who is last to tell his story. I think his name’s unknown – it might have been mentioned but it’s funny how I don’t recall it.

As you’d expect from a sci-fi twist on an iconic Middle English set of stories, in this case spanning multiple worlds and technologies, it’s phenomenally imaginative. Like a lot of sci-fi I’ve read, it suffers a little from not quite managing the balance of over-explaining unfamiliar concepts to the audience (and therefore patronising them) vs. expecting an audience to be familiar with a lot of the alien terminology; it leans a little towards the latter, but this doesn’t feel like a criticism as such, and could be something only readers like myself pick up on – by which I mean, readers who aren’t very nerdy when it comes to space/AI. (Sorry, Alex!) The Shrike in particular must have particularly fun to write, particularly when it comes to its interactions with other characters, all of whom have totally unique experiences with it. Its power lies in its mystery, which is a pretty effective way of depicting a villain that’s genuinely terrifying (see: Alien, Jaws et al.).

The best books, for me, are ones that know what they’re doing. It’s very hard to explain this, but I respect books that weave together seemingly small and random events so that they connect and ultimately contain a huge amount of meaning – Eleanor Catton’s The Luminaries is a great example, or Salman Rushdie’s Midnight’s Children, or heck, even just the Harry Potter series. It’s an admirable trait in fiction and something I’d love to knowingly and successfully do in my own writing one day. Books written in this way suggest that the author did their research, took time to build a world or a universe, thought about the detail and foreshadowed significant events carefully, and it’s those books that you put down with a great sense of satisfaction. You can root it back to Greek mythology, renaissance poetry and chiastic structure or the like, but it’s surprisingly difficult – and therefore commendable – to write a book that feels genuinely well-crafted.

Its only major flaw is the fact it ends on a cliffhanger. After psyching up every character’s motivation, not seeing any of them actually reach the end their separate quests is a little frustrating, even if the ambiguous end is beautiful in its own way. Still, Alex informed me that it’s actually only half a book and the original was twice as long (with the second half turning into its sequel, The Fall of Hyperion) so I don’t feel like I can blame Simmons for the ending. Hyperion, its sequel and several short stories form what is known as the Hyperion Cantos (incidentally the name of a work the poet and pilgrim Martin Silenus is working on within the story), so I’ll be sure to check them all out at some point.

It’s not perfect, of course: despite the rich opportunity to create seven very distinct characters, some of them bleed into each other a little too much – Father Hoyt, Sol Weintraub and Het Masteen to an extent could almost be interchangeable – and while it technically passes the Bechdel test, it could do with a few more complex women in the mix – but it’s very, very good, and for that reason I’ve found a new favourite. I don’t know if The Fall of Hyperion will prove to be as clever as I’m expecting, but it’ll make a pretty good holiday read either way.

So! Five stars on Goodreads. How do I persuade a colleague to buy me the sequel?

[Coming next: Life of Pi by Yann Martel]